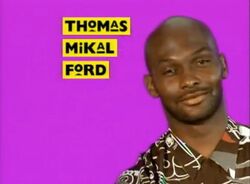 'Thomas "Tommy" Strawn1968 - 2016' is one of Martin's two best friends since childhood, a self-confident and worldly young man whose mysterious employment status is the subject of frequent debate among them all. Regarding Tommy's last name, there is some confusion as to whether it was actually "Strong" or "Strawn" (the former being the most widely assumed). In Season Five, Episode Nine ("World famous," airdate April 3, 1997), Tommy's father, Sgt. Hamilton Strawn (portrayed by John Amos), comes to visit; he and the gang have drinks at Nipsey's, where Tommy and his father end up competing vigorously for the attentions of an attractive young woman. In this episode Sgt. Strawn is seen, throughout his first scene, wearing military fatigues. In several close-ups during this scene the name "Strawn" is clearly visible on the left breast of his uniform. Tommy's name is also spelled "Strawn" on his basketball jersey in the episode featuring the women's Olympic basketball team. When his job is brought up people say, "You ain't got no job, man!" This particularly annoys Martin because while Tommy always alludes or refers to himself being employed, he's never clear about the type of job that he has. However, Martin is sometimes cautious because Tommy's line of work is unknown and suspicious. Tommy is the only character (other than Martin) to appear in every episode of the series. Tommy was played by the late Tommy Ford.