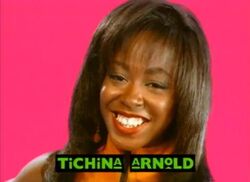 Pamela "Pam" James is The Main Antagonist turned Anti-hero of Martin (tv series). She is Gina's sassy, beautiful, explosive best friend who is consistently portrayed as Martin's Arch Rival. Initially, Pam worked in a boutique on commission. In later episodes, it's revealed that she works at the PR firm where Gina is employed, as Gina's coworker . Pam and Tommy were occasionally flirtatious with each other in the beginning, and this developed into a romantic relationship for a brief time, during the Season 3. They later broke up near the beginning of Season 4 and remained friends for the rest of the series. During Season One, Cole harbored an unrequited crush on Pam, which she usually responded to by losing her temper with him.