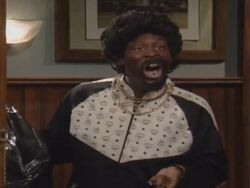 Jerome is a character portrayed by Martin Lawrence. Jerome is a loudmouthed, aging, still well-funded, once flashy but now faded Detroit pimp. He runs a illict casino. He often speaks in rhyming sentences. Jerome doesn't appear in the fifth season as his final appearance was in the episode, "Uptown Friday Night" and his final lines were "and that's the enddd".