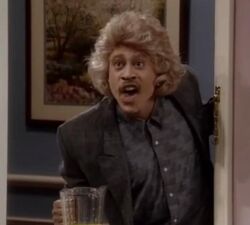 Bob is a character who works in an unknown capacity at the marketing firm where Gina is employed, Bob is best described as a stereotypical surfer-dude-cum-redneck. He speaks in a Southern Californian accent mixed with a Southern twang, and often uses words like "dude" and "man," even in professional settings. Lawrence achieved his appearance as this character with stage make-up and a prosthetic nose attachment to make him appear white, as well as wearing a long, blond mullet wig to complete the look. Bob only appears in 2 episodes, once in the first season and again in the second season.